On Saturday we covered Marca’s big story about Mino Raiola pushing for a Paul Pogba move to Real Madrid.

The Manchester United player was splashed all over the front page of the Spanish newspaper and it was claimed his agent has made two telephone calls to try and get the potential transfer off the ground.

Up to that point, Marca hadn’t really got involved with the story. They’d been covering claims from elsewhere, and the comments from Pogba and Zinedine Zidane, but hadn’t jumped in headfirst themselves.

In the calls, Raiola, who was presented as trying to find a new club for his client, was said to have: ‘conveyed the desire of Paul Pogba to leave Manchester United and find a place in Real Madrid’

Marca made it clear that no decision had yet been taken at the Spanish club, and summer transfers were still in the early planning stage.

Understandably, some fans of the Premier League club didn’t like the claims and went about a verbal destruction of the story. However, the claims were very believable.

Would it really be so odd for Raiola to cosy up to Real Madrid, and offer one of his clients, whether he’d been instructed to or not?

Marca’s claims appeared to have come from information on the side of the Spanish club, yet when it came to Manchester United’s stance it was more assumption at work.

They suggested the club have financial problems ahead of the summer, with the insinuation being those issues could help a Pogba exit.

On Friday, Marca try to breath some new life into the story, with an article from editor Jose Felix Diaz.

The claims are as follows:

Now, forgive us for pushing our take, but it would appear there’s nothing especially new in the majority of it. This story isn’t as concrete feeling as the one from the weekend and feels like an effort to just nudge the thing back out there. 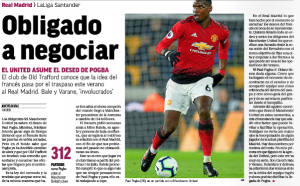 Marca may well have information from the Madrid side of a potential deal, but it’s much less likely they know the inner workings and issues at Old Trafford. It’s very unlikely, whatever the Spanish newspaper would prefer to believe, that a sale of Pogba is financially needed this summer.

The Bale/Varane angle is an obvious extension of other stories, and mirrors what has been claimed by English tabloids and numerous fans who are able to put two and two together. It’s also pretty fortunate for Madrid.

Saturday’s Raiola story was the big and believable one and this doesn’t appear to be a step forward in any way.

It’s based on the ‘law of the market’ which would be that clubs have to listen to offers for players who want out. So, aside from their good information at the weekend, this is all what any onlooker could come up with.