Manchester United star Paul Pogba is on the front page of Saturday’s edition of Marca, as the rumour linking him with a summer move to Real Madrid gets more serious.

It’s worth pointing out the Spanish newspaper hadn’t been pushing hard on this rumour before, mainly covering what had been said elsewhere.

Indeed, aside from Liverpool attacker Sadio Mane, and perhaps one or two more, Marca have been something of a firefighter over the past week, dismissing rumours rather than pushing them.

Now they report that two telephone conversations ‘in recent days’ have taken place between Mino Raiola and Real Madrid, which backs up our hunch of earlier this week that the agent was coming out of winter hibernation.

And as the warm weather approaches, the leaves from autumn, still carpeting the forest floor, begin to rustle. Inhabitants of the wild are ready to leave hibernation and the cold months behind… they can already smell the summer. https://t.co/aH2akUszmi

Marca state that Raiola has offered the midfielder to Madrid, who like him. 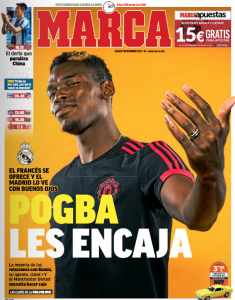 Pogba is said to be in ‘the shop window’, with his agent trying to find him a new club this summer.

Raiola also represents Matthijs de Ligt, with the defender also linked to Madrid, and Manchester United supporters know as well as any that the representative loves becoming as involved as possible once he makes friends with a club.

That hasn’t been the case with Madrid, Florentino Perez isn’t a fan, but relations are said to have improved greatly recently.

In the telephone calls, Raiola has ‘conveyed the desire of Paul Pogba to leave Manchester United and find a place in Real Madrid’.

Marca then make it very clear that Real Madrid haven’t started an operation to try and sign the player. The club are still studying the market, and whilst Zinedine Zidane likes Pogba, and it’s thought the player could be suitable for the rebuild, this isn’t a full-on Marca job. 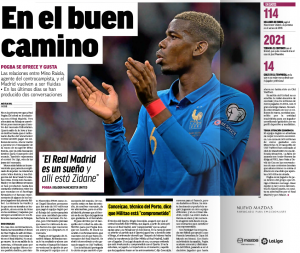 They do, however, believe there could be finance issues at Old Trafford, pointing to issues with the renewals of Ander Herrera, David De Gea and Juan Mata. That could be wishful thinking.

Rather than Real Madrid being ultra-keen, the big takeaway from this story is the insistence Pogba wants out. He’s said to feel ‘uncomfortable’ at the club, and have made it very clear to Raiola that he wants a transfer and his mind isn’t changing despite the exit of Jose Mourinho.