Luka Jovic continues to be perhaps the most hyped player ahead of the summer transfer window.

It’s been very clear for a long time that someone, probably close to the player, has been pushing claims of interest from every top club you could probably imagine.

Then the Spanish newspaper moves on to Premier League interest, and Chelsea are presented as being at the front of the queue.

Whilst both Manchester clubs are Arsenal are credited with an interest, it’s stated Chelsea are the ‘most insistent’ English club.

It’s estimated the transfer fee could rise to €80m, which is getting carried with itself. Whatever the price, Eintracht Frankfurt stand to make a huge profit on the €8m they’ll pay Benfica at the end of the season. 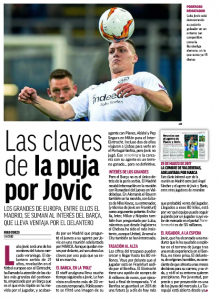 To make it clear, the transfer from Benfica to Frankfurt is all agreed, contract and everything.

As it stands, Chelsea are banned from making signings for the next two windows, but are in a process of appeal and it would be wise to continue targeting players.