After reporting the talks between Nottingham Forest and Benfica for the transfers of João Carvalho and Diogo Gonçalves, the Portuguese press now brings all the details of the moves.

According to newspaper A Bola, the Championship side will be spending around €15m to take Carvalho permanently, while Gonçalves will join the club on a loan deal.

The outlet reports that it’s all agreed between Benfica, Nottingham Forest, João Carvalho, Diogo Gonçalves and, of course, Jorge Mendes, who’s handling all the operation.

Regarding Gonçalves, whose potential is still seen as a big deal, the loan move includes a buying option. A Bola doesn’t know the exact amount, but guarantees that it’s over €20m. 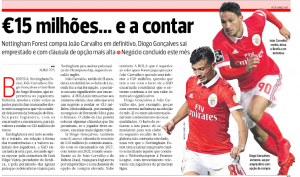 One interesting thing A Bola writes is that Nottingham Forest would now have ‘very similar a project’ to Wolves, with ‘relevant investment in players of top leagues’.

That’s pretty good news for fans, not only for the strong squad they’re about to build, but also for being well known in other countries as a good destination for young players. Wolves only needed one year to get that fame.

The deals for Carvalho and Gonçalves are expected to be concluded before the end of June.