William Carvalho’s wish to play in England has never been a secret. And it turns out that it could finally be an advantage for a Premier League club.

On Sunday, newspaper O Jogo reports that Shakhtar Donetsk have joined the race for the midfielder. Manager Paulo Fonseca would like the player to replace Fred, who’s leaving for Manchester United.

But as Everton would like to take him to the Premier League, that makes them Carvalho’s favourite option, and some news is said to be expected about this chase soon.

For now, the Toffees don’t want to spend more than €20m on the signing, while Sporting demand at least €30m. But this situation may change a lot in the next few days. 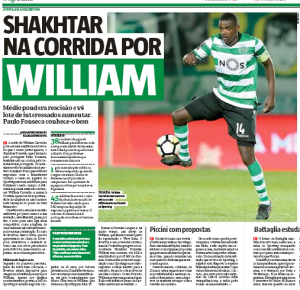 There’s still a chance that William wants to terminate his contract with Sporting, and therefore, leave for free. That’s probably why Everton are offering so little, as the Lions have a complicated decision to make.

With other newspapers like Diário de Notícias claiming that Sporting have authorised William’s agent to negotiate his sale in England, maybe there will be news in the next few days.