Leading up to Manchester City’s trip to the Bernabeu, much of the Spanish focus had been on Pep Guardiola and his brilliant record at Real Madrid’s stadium.

Whilst Barcelona manager, Guardiola made life a misery for fans at Madrid’s home ground, and he returned to do similar on Wednesday evening.

With a headline reading ‘The ogre of the Bernabeu’, Marca explain that no other manager has such a record in Madrid. It started off in the worst possible way for Los Blancos, when Guardiola’s Barcelona beat Real Madrid 6-2 during the 2008-09 season.

That’s a result which sent shockwaves around the football world, and Marca explain it’s a memory Barcelona fans hold dear, whereas in Madrid they’d like to ‘bury it under a thousands tonnes of asbestos’.

Manchester City have added to that, and whilst there may be gripes about the referee, 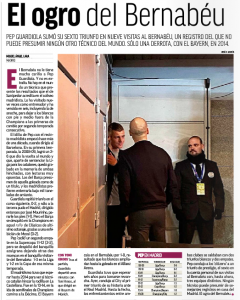 something which Marca aren’t pushing as strongly as AS, there’s an acceptance Guardiola’s team and the manager’s tactics were simply too good for the opposition.

Guardiola has won six times and only lost once at the Bernabeu, with Bayern Munich, and now he has another ‘prestige’ victory to add to his CV.