The claims first appeared in the Portuguese media on Friday morning, and there’s now further reports about the potential deal.

Figueiredo has a contract with Nottingham Forest which lasts until the end of June, so is able to talk to clubs about joining them in the summer as a free agent.

Vitória would rather ham him sooner than that, but they’re not willing to pay to help that move happen.

Saturday’s edition of O Jogo reports the Portuguese club are ready to welcome the Nottingham Forest player, but only if he frees himself from his contract. Negotiations are ongoing, and it’s made clear that everything depends on the decision made by the Championship club. 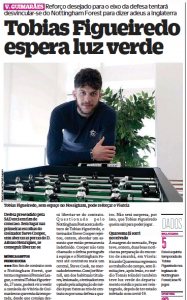 Should they let the defender walk away from the final months of his deal, then he can return to Portuguese football and negotiate a contract with Vitória as a free agent in the coming days.