Fairly quickly after his arrival in Rome, the Italian media made a big deal about Roma potentially making Chris Smalling’s loan from Manchester United a permanent move.

There were many articles written on the matter, mostly surrounding the price the Old Trafford club would want for the defender, but it all went a bit quiet over the January transfer window.

Of course, there was a reason for that, mainly because Roma were focusing on other, more pressing, aspects of their team, but also due to the fact their form hasn’t been great.

Gianluca Petrachi, their director of football, made it clear recently that a full transfer to Italy’s capital depended on what Smalling wanted to do, but there’s also Manchester United to deal with.

Gazzetta dello Sport have an article on the matter on Thurdsay, explaining that Roma missing out on qualifying for the Champions League could make matters difficult due to the deal’s finances.

United are asking for ‘no less than €18m’, which added to the three and a half year contract he would sign off the back of the agreement, would be an operation ‘of almost €40m for a player who turns 31 in November’. 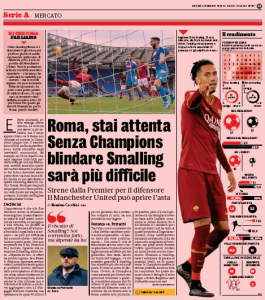 Furthermore, there’s the possibility the Premier League club want him back because they know they could get more money from elsewhere, especially with English clubs circling.

They could also offer Smalling more wages than Roma, which means Champions League football is a necessity for the Serie A club, as it would add €50m to their war chest and potentially convince the defender to stay.

There are some positives to take from all this, with Gazzetta explaining ‘the player and his family are doing well in the capital’, but his ambition ‘remains to play at the highest level’ with the elite European competition ‘the favourite showcase’.