Manchester United are keen to sign Frenkie de Jong this summer and reports in the UK have stressed they have already made an offer to Barcelona.

The Red Devils wanting the midfielder is nothing new since he is the main target for Erik ten Hag. The La Liga side are open to sanctioning his sale due to their financial needs.

With claims of United making a proposal and Barca wanting to sell, a deal could be carried out soon. However, that isn’t the case since ‘no firm offer’ from the Premier League side has arrived at the Camp Nou.

That’s according to Mundo Deportivo, who explain Ten Hag’s side have not tabled an offer because they have ‘not yet persuaded’ the Netherlands international. The latter has ‘serious doubts’ over making a switch to Old Trafford this summer.

Despite United’s financial power, Barcelona have found out the English club are struggling to persuade the player since they will not play in the Champions League next term. 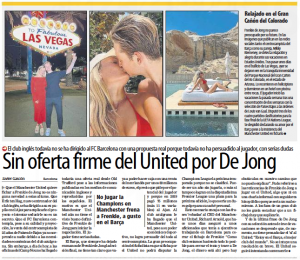 Xavi Hernández’s side, who are asking for €80m for the former Ajax man, have always left the final decision in De Jong’s hands.

The newspaper conclude their report by stating: ‘No resolution is in sight soon. United will keep trying to convince him.’