Needless to say, José Mourinho’s discussion with Paul Pogba at Manchester United’s training session on Wednesday got some big attention from the world media.

It’s no exaggeration to say it’s been the biggest story in world football.

Many sports outlets have stories about it today, but Argentine newspaper Olé chose to take it to the next level. On their second page, they’ve made a complete top 10 of all the ‘enemies’ Mourinho has made in the past few years.

Some of the problems were pitch-side arguments, like he had with the former Barcelona manager Tito Vilanova and the former Chelsea doctor Eva Carnero. 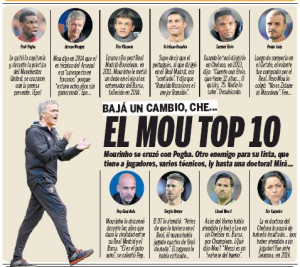 Most of the others come from pre and post match press conferences, where Mourinho doesn’t only like to make comments about opponents, but about his own players as well.

Now if there are ten good names that were involved in public fights with him, we can only imagine how many enemies Mourinho secretly has.