Over the weekend, Adrien Silva has told Portuguese outlet RTP that he had an offer to return to Sporting, and would be ready to make the move.

The Lions, however, have responded to the TV channel claiming that they actually haven’t made such bid, and aren’t planning to do so.

Now Adrien Silva’s agent, also his father, continues to speak to several media outlets about his son’s situation at the Foxes, and commented on the rumour as well.

Manuel Silva was interviewed by newspaper Record, and has claimed that Sporting have at least made some contacts to know the availability from the player.

“Sporting are very important for Adrien, a club for which he will always have a lot of respect, both for what he has been able to do there and for what it still represents for him today,” Manuel Silva told Record.

“He did everything for the club. When he left, he left, and the club were reimbursed. If there was a proposal? I don’t know if it is true or not… I know, yes, that he was contacted several times by people from Sporting to probe the possibility of him coming back.” 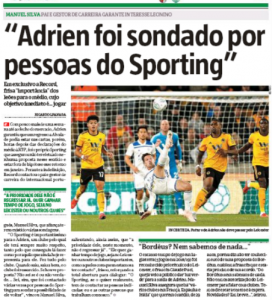 Manuel Sliva, however, has claimed that the Lions wouldn’t have a priority in case many offers come: “His priority is not to return right now. He wants to gain playing time, whether in Leicester or at other major clubs, like those with whom we are having contact.”

Regarding the rumours of a Bordeaux move, Adrien’s father claims to know nothing about it: “We don’t even know about Bordeaux. We don’t have permission from Leicester to speak to clubs. We must be attentive and waiting. News? Coming soon…”