The striker joined the club on a loan deal back in January, and turning it into a permanent transfer has been proving to be the right move from them, as he has two goals and one assist in four appearances so far.

Now as Tuttosport speaks to the player’s agent, they also highlight the fact that clubs such as Newcastle United and West Ham have both been interested in him.

It all starts with his representative Didier Pingsi speaking about the player’s future, claiming he should aim for bigger leagues next.

“I think M’Bala must now consolidate his experience in Serie A. Then he’ll be ready for the five most important European championships: England, France, Spain, Germany and precisely Italy”. 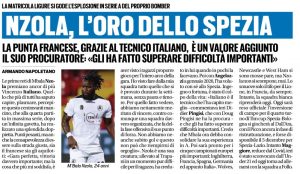 Then Tuttosport claims that both Newcastle and West Ham have ‘moved’ for the 24-year-old.

It’s said their interest didn’t change the player’s mentality, who keeps focused on succeeding with Spezia for now.

It isn’t said how much Magpies and Hammers would like to spend on his signing. Even though he’s valued by Transfermarkt at only €900k, the Italian side would obviously demand a chunk more than that if it came down to it.