Sabah claim Newcastle United scouts watched Besiktas striker Cenk Tosun during the latest international break, and, following the now lengthy story of this transfer rumour, were impressed with what they saw of the 26-year old striker.

The Turkish newspaper report Newcastle United were present during Turkey’s 3-2 defeat to Albania, but Tosun set up both goals for his team. Sabah say Tosun’s back heel pass to Emre Akbaba would have impressed the Newcastle United scouts, ahead of the next window. 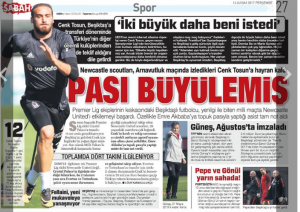 Newcastle United are now expected to follow this up by watching Tosun in Besiktas’ next two games.

They claim Senol Tosun recently returned to Turkey from England after opening discussions with Newcastle officials regarding his son. The Turkish website say talks between the two parties are going to continue in the coming weeks.

Tosun has been on fire for Besiktas this season, and has already scored 10 goals in all competitions.