We all remember the case of William Carvalho, when the Hammers couldn’t find an agreement with Sporting and ended up in a media war with the club.

But there was another bid, reported by Jornal de Notícias at the time, claiming West Ham tried to sign Adrien Silva and João Palhinha in a €30m double deal.

Silva ended up making a move to Leicester City, and Palhinha, despite having stayed at Sporting, is now more unlikely to move.

That’s because as reported by O Jogo today, the player has renewed his contract with the Lions, and is now committed until 2021. 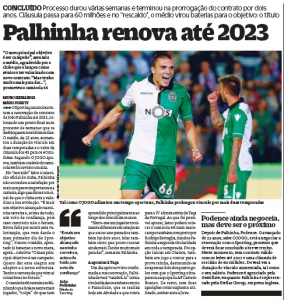 Palhinha’s release clause was also increased, with the figures going from €45 to €60m.

So the midfielder may not have regular minutes at the club, as he only made three appearances this season, but Sporting are clearly betting on his future and protecting him from approaches.

That’s why this transfer sounds nearly impossible to happen now, especially because the Hammers’ bid in the summer was far too low, leaving it clear there was never an intention to spend big on him.