Portuguese newspaper A Bola have a Marco Silva section on their Friday back page, as they continue to look at the story for a Portuguese audience, and also provide updates via their own sources.

Claims Everton have had a £10m offer for Silva rejected by Watford are covered, and A Bola make a point of saying the manager himself would be on much better financial terms at Goodison Park.

Despite that, it’s stated Marco Silva will in no way try to force Watford’s hand, and appreciates the faith shown in him by the club.

That’s why he needs to wait for Everton to find an agreement, and, if that happens, he’ll be happy to make the move, according to A Bola. 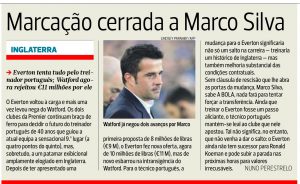 In Portugal it’s certainly not considered that this one is dead, and the newspaper states Everton can ‘in the coming hours’ make an offer Watford can’t refuse.

How much is that? Nobody seems to know, but it’s probably time managers were valued more highly, given a reserve fullback can cost more than Everton have already offered… even though that’s a big amount relative to previous manager fees.