It’s reported the Premier League club are interested in Rodrigues, along with Valencia and Koln, with reports the Magpies could make an offer when the window opens in the new year.

Rodrigues has been heavily linked with a move to Newcastle in the past couple of transfer windows and Takvim report he is again a target for Rafa Benitez.

Benitez will be looking to strengthen his squad in January if he can get the backing from the board, as the English club look to consolidate their place in the top flight. 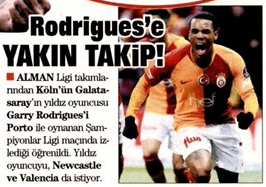 The 28-year old Cape Verde winger has made 18 appearances for Galatasaray this season and scored 4 goals.

However, he’s failed to replicate the form he showed in the last campaign when other Premier League clubs were following him.