Kerim Mrabti is a 24-year-old midfielder who has spent his club career in Sweden, playing for three different clubs – Enköpings SK, IK Sirius and Djurgårdens IF. He is currently playing for Djurgårdens since 2015.

Mrabti’s form for Djurgårdens saw him attract interest from England and Italy. According to the Belgian outlet Het Laatste Nieuws, Rafael Benitez’s Newcastle United and Serie A side Udinese were interested in signing him in the January transfer window.

The same report claims the Tyneside club made a “concrete bid” of €1.3m, while Udinese’s bid was €300,000 short of Newcastle’s offer. Djurgårdens were unwilling to allow Mrabti to leave in January as they wanted to retain his services to improve their chances of winning the Svenska Cupen (Swedish Cup).

Djurgårdens were successful in winning the cup competition and Mrabti scored one of the three goals his side managed in the final against Malmo. 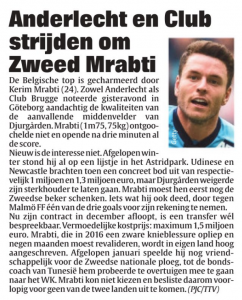 His contract with his current employers runs down at the end of this calendar year.

HLN claims Anderlecht and Club Brugge are interested in the player. Mrabti’s employers are ready to negotiate his sale and are looking for €1.5m for the midfielder.

Newcastle’s €1.3m would stand a high chance of success now.