Reports from the past week have suggested Barcelona B midfielder Riqui Puig could leave the Spanish champions and join Tottenham Hotspur on a free transfer this summer.

Catalan newspaper Sport earlier reported the north London club are “close” to signing the 18-year-old and their manager Mauricio Pochettino is “in love” with the player’s game.

The same outlet reported on Thursday that Barcelona manager Ernesto Valverde has urged his employers to keep Puig at the club and counter the offer from Spurs. Valverde wanted the top brass at Camp Nou to put all their effort in blocking Puig’s move to Tottenham and hand him a new contract.

Today’s edition of Sport claims the teenager will not join Tottenham and will continue with his current employers beyond the summer transfer window.

The report claims Puig has already reached an agreement in principle to extend his contract at Barcelona. The midfielder is likely to sign a long term contract in the next two weeks. Mundo Deportivo are reporting the same. 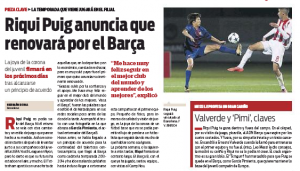 Puig even tweeted on Thursday, suggesting that he will sign a contract with his current employers

“Thanks for the trust and support. It makes me very happy to follow at the best club in the world and learn from the best. GO BARCA,” said Puig.