Newcastle United have entered the scene for Bayern Munich’s Joshua Zirkzee, according to claims from Belgium.

The 21-year-old has found it hard to enjoy regular game time with the Bundesliga winners and spent the last 18 months out on loan at Parma and Anderlecht.

During his season-long loan spell with the Belgian side, the forward managed 18 goals and 13 assists from 47 matches in all competitions.

Anderlecht are working to take Inter Milan’s Sebastiano Esposito this summer. That’s according to Het Laatste Nieuws, who explain his arrival further reduces their chances of signing Zirkzee again.

That, however, has not stopped the Jupiler Pro League side following the player’s situation closely, but a potential deal completely depends on the Bavarian club.

In addition to this, Anderlecht will face competition from Newcastle and Ajax as these two sides are ‘showing interest’ in Zirkzee. That’s all HLN have to say about the Magpies.

Sky Deutschland explain the Netherlands U21 international will be a ‘hot topic’ in the next few weeks since VfB Stuttgart, along with Ajax, have got in touch [likely with Bayern] for him. 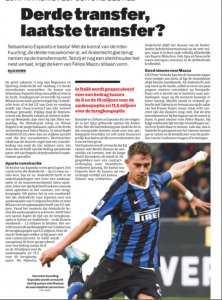 Although Sky don’t mention Newcastle, they do state Zirkzee ‘lacks prospects’ at Bayern after Sadio Mané’s arrival. It means the player is expected to be on the move again this summer.