Brighton defender Leo Ostigard is in something of a ‘cold war’ with the club as he tries to secure a move to Napoli.

That’s according to Corriere dello Sport, who say the Norwegian has ‘clearly explained’ he wants to join the Italian side this summer.

The newspaper reports that Brighton believe an arrangement with Torino is closer to being completed, and is more advantageous to them as well, but Ostigard doesn’t want that.

He wants the move to Napoli and has ‘clearly explained’ as much to those in charge of the Seagulls.

Indeed, he has been in agreement with Napoli over a move for a while, and the last details of that agreement were settled during a recent meeting between his agent Jim Solbakken and Napoli chief, Cristiano Giuntoli. 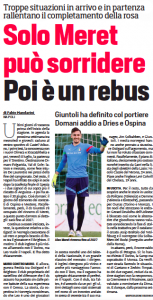 That’s led to a cold war between the player and Brighton, who are seemingly in different positions at this moment in time.

Of course, it can all be settled by Napoli coming to an agreement with Brighton, but that doesn’t appear to be on the cards any time soon either.

The Seagulls will want to sort something given Ostigard is out of contract next year, and we’d expect an agreement to be found, especially with the player remaining firm on his wishes.