Newcastle United are interested in the signing of Braga youngster Roger Fernandes, according to reports from Portugal today.

A big story from newspaper O Jogo claims that the Magpies watched the winger during the season, and following their ‘positive reports’, they now consider advancing for a deal, having ‘promised’ to be back with an offer.

Newcastle’s notes reportedly got in the hands of club director Dan Ashworth, and their effort to land the player this summer could get to €20m.

The most impressing fact about this story is that Roger is just 16. He made his debut for Braga this season, at the age of 15, and became the youngest player to feature in the Portuguese league. 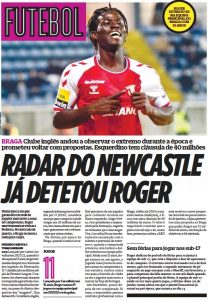 His early success is said to be drawing the interest from several clubs, and in January, Braga already turned down a €15m bid from Ajax.

With Premier League clubs normally linked to big signings from Benfica, Porto or Sporting, it’s interesting to see Newcastle involved in a potential big deal with the Arsenalistas this time.

Now as the Magpies analyse the signing, we wait and see if they’re really going for Roger this summer.

For the record, he’s also protected by a €40m release clause.