Home Europe Newcastle ‘ready to return to the assault’ after first offer ‘worth €30m’...
SHARE

Picking up an incredibly valuable three points this weekend by beating Leeds United, Newcastle United took a step in the right direction in their quest to stay up in the Premier League.

There was some indication that Eddie Howe’s plan was starting to work, but it’s inevitably clear that reinforcements are still needed, with just a week left in the transfer window to get it done.

One of the names to have made waves over the past week has been that of Robin Gosens, currently contracted to Atalanta.

The Germany international was the subject of a first offer from Newcastle, who clearly want a new attack-minded left-back, but, as Corriere dello Sport point out on Monday, the bid ‘worth €30m’ was ‘returned to sender’.

That being said, the Magpies aren’t going to give up that easily, and ‘are ready to return to the assault’ for the 27-year-old. 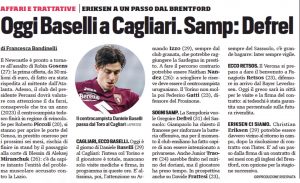 Then there’s the important step of convincing the player that a move from a club currently in the Champions League to one fighting against relegation to the Championship is a good idea.

This is a story for another day, however, since the first step would be reaching an agreement with Atalanta.