FC Porto beat Famalicao 3-1 on Sunday, as the club continue their fight to win the Portuguese title.

They’re currently on a great run of form, and sit top of the table with a six point cushion over Sporting, with Benfica a point further back in third.

O Jogo report that a Manchester United official was spotted at the match, along with officials from Atletico Madrid, Borussia Dortmund, Nimes, Saint-Étienne, Rennes, Real Sociedad and Sassuolo.

The Portuguese newspaper suggest both the Red Devils and Rojiblancos will have been looking at Luis Diaz, with the Colombian attacker continuing to win fans ahead of the summer transfer window.

He was linked with a move to Everton during the last market, although the player is probably now out of the Merseyside club’s reach.

Diaz scored the second goal for Porto, with O Jogo believing he was one of the best players on the pitch. 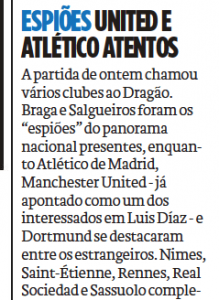 Any serious Manchester United attempt for Diaz is likely to be dependent on exits, given the number of players Ralf Rangnick has in attacking positions.

The 25-year-old has 16 goals and six assists so far this season, playing on the left.