Home Europe Newcastle offer to player backed up – ‘Team that has knocked with...
SHARE

On Thursday, we covered an article from Italy claiming that Newcastle United were ready to offer Ivan Perisic a contract worth €6.5m/year post tax.

This came from Calciomercato, who believed the Magpies were prepared to take advantage of the Croatian’s contractual situation (his Inter deal expires next month) to try and bring in an experienced player for Eddie Howe’s squad.

It was explained Perisic was now faced with a life choice: choose to remain at Inter, who have put €4.5m/year on the table in their renewal, or head over to Newcastle and start afresh with more money in his bank account.

Gazzetta dello Sport on Friday also cover the situation, pointing out that Perisic wants the Serie A side to give him a two-year deal worth €6m/year; a demand the club have yet to meet. 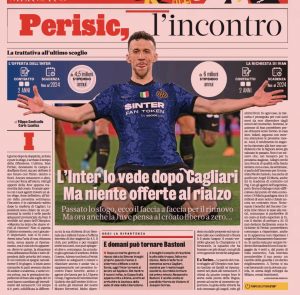 It’s no secret that Inter already have his replacement lined up in Robin Gosens, and the left-winger’s future ‘will now depend on the proposals on his table’.

That’s when Newcastle are mentioned, with the Magpies described as ‘the team that has knocked with the most money’.

However, Perisic’s desire to play Champions League football means that what the Premier League club are offering ‘does not give him adequate technical guarantees’ at the minute.

It could be that he waits a bit longer and sees what arrives in the coming weeks before making a decision, but it certainly appears that Newcastle are there, simply waiting for an answer.