Earlier this month, Allan Saint-Maximin’s agent revealed that Liverpool were interested in signing his client and failure to land the Nice winger saw the Reds sign Xherdan Shaqiri from Stoke City.

French newspaper Nice-Matin claims Jurgen Klopp’s side were not the only club interested in signing the 21-year-old as they reveal that Newcastle United and Sevilla were also after the former Saint-Étienne man.

Patrick Vieira was expecting Mario Balotelli to leave the club, but he continued with his current employer and after allowing Alassane Pléa join Borussia Mönchengladbach, the Ligue 1 outfit had no plans to let the France U21 leave the club.

The Magpies and the Spanish side tabled offers for the player, and the leaders of the club did not even respond to the proposals they received, even thought it was ‘tempting’. 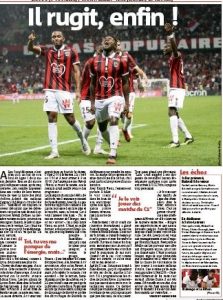 Nice remain confident that Saint-Maximin’s best is yet to come, and thus, they are looking to increase his asking price to €60m, with a hope to cash in from his sale in 2019.