Since achieving promotion to the Premier League, Newcastle United are undoubtedly one of the Portuguese press’ favourites to be buying Liga NOS players this summer.

One of the new targets for Newcastle today is Miguel Layun, a former Watford left-back who moved to Porto two seasons ago.

The player hasn’t been getting the game time he expected in Portugal, and according to newspaper Record today, there are three clubs willing to take him away.

One of them is Roma, who would be ready to pay the same €6m spent by Porto to sign him. There’s also Espanyol, who are now managed by Quique Flores, who was Layun’s boss for a short time at Watford.

And then there’s Newcastle, the latest club to show interest, but Record doesn’t add many details about Rafael Benitez’s interest.

Although Layun’s departure from Porto was considered highly likely at the end of the season, it will now depend on the club’s next manager. Nuno Espírito Santo clearly wasn’t 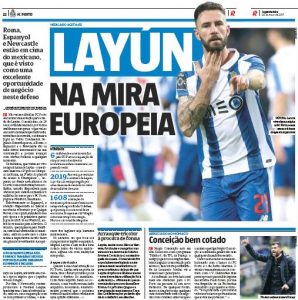 a fan of him, but a new boss could maybe change the player’s mind and convince him to stay.

The 28-year-old has a €40m release clause, but recent reports from Portugal have been saying that recovering the €6m is Porto’s main objective in case of a sale.

Benitez will want to add Premier League experience to his Newcastle United squad this summer, and signing Layun would do that, at a relatively cheap price.