Hadi Sacko’s situation has been an odd one recently. As a Sporting owned player it’d be expected his future would be followed very closely indeed. Portugal has several daily sport newspapers, and football is hugely covered in the country.

Top clubs like Sporting, Benfica, and Porto have all their players followed closely, even when there’s a tiny bit of news, and often when there’s nothing at all. Therefore the total radio silence over Sacko since his Leeds loan ended had been strange.

That silence was broken when it was reported in Portugal on Sunday that Leeds United have told Sporting they’re going to activate the €2m clause. But still, the coverage has been smaller than it would normally be expected.

It could be because there’s been a feeling for a while in Portugal that Sacko was never likely to play any meaningful role at Sporting. He was off to Leeds and if that didn’t result in a permanent move then he’d be off somewhere else.

Portuguese newspaper A Bola have a snippet in their Monday edition on what they seem to believe is a strange reaction from Leeds United fans. They must think it odd for it to be newsworthy, it’s not usually A Bola’s thing, they don’t do ‘How fans on Twitter reacted to XYZ…’ articles. 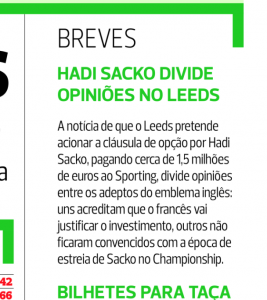 A Bola report that Sacko has divided opinion among Leeds United fans, with some not so convinced with the transfer. The reasoning behind A Bola being bothered seems to be to give their readers the impression Sporting have done a good piece of business. They put the price at €1.5m, although that appears to be a mistake.

Sacko arrived at Sporting from Bordeaux, played for the B side, went back to France on loan, and then arrived at Leeds. The lack of coverage of his career in the Sporting press shows he hasn’t made a great impact, and, strangely, Sacko is hardly covered in France either.

The 23 year old winger needs to produce more end product with Leeds United, should the transfer sail through, to start getting some recognition in his home country.