Home Europe ‘New sudden brake in the negotiations’ between Man United and club for...
SHARE

Over the past month or so, there’s been a considerable lack of updates regarding Manchester United’s interest in Mario Mandzukić, and Corriere dello Sport might have the reason why.

Needing to bolster their attack after the sale of Romelu Lukaku to Inter, the Premier League side targeted the Croatian late on in the window, but the veteran forward decided to stay in Turin to find for his space, which backfired dramatically.

Unfortunately for him, he was immediately pushed to one side by Maurizio Sarri, who has yet to use him in any competition, meaning a January exit is needed.

There was talk of him potentially moving to Old Trafford, with negotiations taking place, but they haven’t gone well. 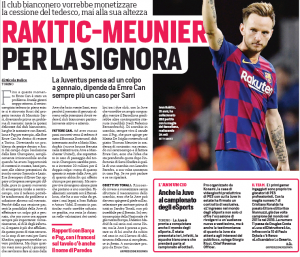 Corriere, when looking at Borussia Dortmund’s interest in both Mandzukić and Emre Can, explain there has been a ‘new sudden brake in the negotiations between Manchester United and Juventus’ for the former Bayern Munich goalscorer.

Why that has happened isn’t explained, so there’s no indication which end the ‘braking’ has come from.

Whether that truly affects United’s plans remains to be seen, and it could be he was simply the cheaper option of their targets, with other names also on a list they can now turn to.