A week ago, we covered a story from the French press explaining what Stoke City could expect from their latest signing, Sami Bahri.

The 17-year-old had recently signed a three-year deal with the Potters, where he will first play for the U18s and the U23s before, hopefully, making it to the first-team down the line.

Compared to Sergio Agüero by the local media in the way he approaches the game, the ‘extremely talented’ youngster will be doing his best to impress at the Championship club; a move he discussed at length with La Dépêche du Midi on Thursday.

First, the newspaper enquired as to how the move came about.

He replied: “Through my agents. They sent me to do a few trials. I went to Birmingham a few months ago for three weeks. I should have signed there, but it was a bit complicated with the lockdown. I came back to England, to Stoke City. I did a week of trial and they offered me to sign a contract”.

That shows how impressed those in charge of the club’s academy were, and they immediately sorted out a host family for Bahri, who is sharing with two other players.

Asked how things have been going over the past three weeks since he signed, he said: “Really well. I’ve managed to settle down nicely. I’m keeping my feet on the ground even if I’m aware of the luck I have being here. That doesn’t mean I’m stressed or am getting big headed. Thanks to my family, I’m staying calm”. 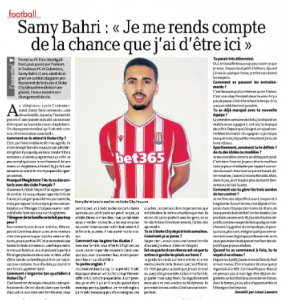 Describing the training sessions as ‘far more intense’ than in France, Bahri also described where Stoke City fans can expect to see him on the pitch.

He said: “I think of myself as a centre forward. I’m at my best through the middle, but I can adapt depending on what the manager wants. Work and determination wise, I love Cristiano Ronaldo, but how I play, I inspire myself more from Karim Benzema or Luis Suárez”.

As for how he’s approaching the fact he has a three year deal with a Championship club, the youngster is just taking things as they come.

He explained: “I’ve fixed myself short, medium and long-term goals. First, I want to impose myself with the U18s, to score goals and be one of the leaders. Next year, still in the U18s, I’ll have other goals, like playing a few U23 games, getting a few minutes and why not, a bit later, have a few training sessions with the first team. I don’t want to skip steps and am just setting myself goals I can achieve”.