The name Sami Bahri may not mean much to Stoke City fans, but it’s one they may get to learn a bit more of over the years if all goes to plan.

The 17-year-old recently signed a three-year deal with the Potters, arriving from Colomier’s U19s, where other French clubs had taken notice of his ability, notably Guingamp and Nîmes Olympique.

Bahri arrives with a bit of expectation around him, having scored 25 goals in one season for Toulouse’s U15s, with a style of player similar to that of a certain Sergio Agüero’s, according to La Dépêche du Midi, who have an article on him this Thursday.

He started his career at Football Club de Foix-Montgailhard (FCFM for short), where one of their key staff members, Jean Philippe Girardin explained the youngster was always ahead of his age group since the U7s. 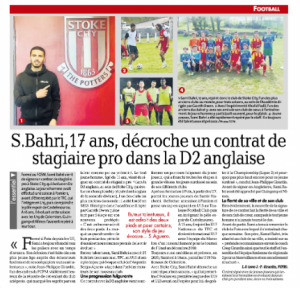 At Stoke, he signed a three year contract, which, Girardin said, will ‘allow him to play in the U19 and U23 Premier League before, we hope for him, taste the Championship and why not higher for this exceptionally gifted youngster’.

Gareth Owen, the man in charge of Stoke’s academy, is apparently excited to see what Bahri can do, saying: “He can score with both feet, and has scored a great amount of goals during his trial, so we’re keen to see him develop”.