This morning, we covered a piece from the Portuguese press in which Adel Taarabt mentioned the great season he had at Queens Park Rangers nine years ago.

Now it looks like the local media wanted to know more about his time in England, because newspaper A Bola also features an interview with the club’s former manager Neil Warnock.

The 71-year-old has only talked about the time when they’ve worked together at the Loftus Road side, saying that Taarabt was a special player.

“I talked to him and told him that he would be the one to lead us up the division, that he would always play, having good or bad performances. This gave him confidence and motivated him.” 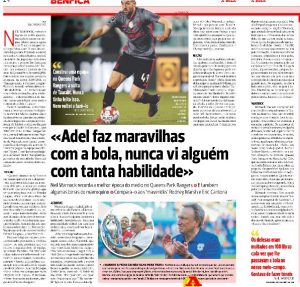 “I built a team at his will. I had never done that. And I never did it again. I had a feeling that it would be him who would lead us to the Premier League.

“He’s fantastic with the ball, he does wonders with the ball. I’ve never seen anyone with such skill. He has a difficult personality, he was also an exhibitionist, but he has to be well led.”

Speaking of how hard it was to manage Taarabt, Warnock has revealed some of his secrets to keeping the player in line, which sometimes needed cooperation from other players.

“Sometimes he had tantrums in the field. Once we were playing Hull City and, in the first minutes, he suffered two fouls that the referee didn’t give. He was kicked and took a tough tackle. He waved to the bank and asked my assistant, Keith Curle, to sub him. Keith just said to me: ‘He wants to leave, he wants to leave. What do I do?’. I replied: ‘Ignore him, turn your back on him and ignore him’.”

And it turns out that Taarabt really had a fantastic season in 2010/11, with 19 goals and 21 assists in the Championship. That proved Warnock to be right from the beginning. He says the winger was in ‘Cantona’s category’.

“It wasn’t easy to deal with him. But it was worth it. We won the Championship.”

Warnock has admitted that he doesn’t follow a lot of Portuguese football, but says he stays in touch with Taarabt, with the player recently sending him a picture showing he’s in good shape.

“Obviously, in today’s football, with tactical developments and new physical demands, these players are not very lucky. I wish him the best!”