Today is one of those days when the Portuguese media features several stories about how great Pedro Porro has been for Sporting.

On loan from Manchester City until the end of the season, the fullback has been impressing at the Lions since his arrival in 2020, and is now said to be ‘at the peak of his form’.

We see at least three newspapers highlighting Porro’s recent performances for Sporting, and of course, they all mention his big chances of staying in Lisbon.

The Lions have a buying option to take the player from Manchester City permanently, for €8.5m. Even though past reports claimed that’d be triggered during the summer and it never was, there’s still big confidence that the option will be used at some point. 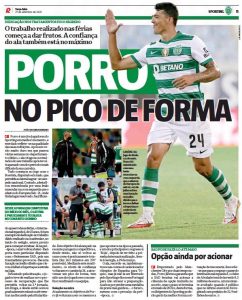 Newspaper Jornal de Notícias writes that Manchester City ‘apparently don’t see a big future’ in Porro, and that’s why they’ve loaned him out with the chance of a permanent move.

Meanwhile, Record says the player ‘already has the guarantee’ that the Lions will buy him. Since the option only expires in May 2022, the board will look for the best way to do it in financial terms.

O Jogo is another one sure of the permanent move. They write that Porro ‘already has agreement to stay, with a pay rise’, and is only waiting to sign the deal. It’s said he’ll make €800k per year in a contract until 2025.