Record seem to be getting into the swing of big claims on Saturdays. Last week was the turn of Everton and William Carvalho, with the Portuguese newspaper then spending the rest of the week completing ignoring that story, as if they’d never put it on their cover and given it a double page spread inside.

The latest will probably be harder to subsequently ignore, because Record have chosen the Manchester United route. It’s claimed Jose Mourinho’s club have ‘awakened’ to Alejandro Grimaldo.

Record can’t suggest Manchester United have been specifically scouting Grimaldo, because with the club have officials at almost every Benfica match, that would be a stretch even for them.

However, it’s stated that reports on Benfica have recently been highlighting Grimaldo, and the level of the left back. So much so that Mourinho this week gave his ‘OK’ to the further pursuit of the 22 year old left back. 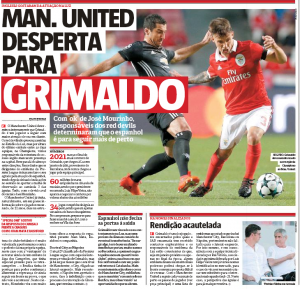 With Luke Shaw still in banishment, wheeled out occasionally to aid further public humiliation, a specialist left back doesn’t seem like a bad idea. Grimaldo has been very highly rated since his time at Barcelona, but saw his progress curtailed by a string of injuries.

That could be why he’s still at Benfica, with Pep Guardiola interest referenced repeatedly, but no time seeming right for the move. A total of 14 league matches for Benfica last season needs to be improved upon, and Grimaldo has 3 so far this campaign, with another 3 in the Champions League.

Record believe the price is €40m.