Home Premier League Chelsea ‘This is the moment’ – Marca back up impending Chelsea offer, ‘decisive...
SHARE

Earlier today we covered claims from ABC Sevilla, one of the major newspapers closest to the Spanish club, that a new offer is expected from Chelsea for Jules Kounde.

Sevilla believe this because it’s what the player’s agent, Jonathan Kebe, has presented to them.

Marca back up that expected offer but they have no mention of the agent. The Spanish newspaper says Chelsea are preparing a new offer for the French defender, ‘this is the moment’ for it to happen, and that these are ‘decisive days’ for Kounde’s future.

As far as Marca are concerned, Sevilla are in a very strong position.

Should Chelsea meet the asking price, which isn’t stated in the report, then the La Liga side will be happy to accept it. Alternatively, if that doesn’t happen then the club are quite happy to keep the player for the rest of the current season. 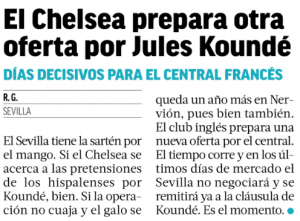 Towards the end of the report, it’s stated Seville won’t negotiate and are instead referring to the player’s buyout clause.

That feels unlikely, and potentially contradicts the earlier part of the report, especially given the clause has increased from €80m to €90m for the final two weeks of the window.