With Carlos Vinícius scoring a hat-trick last weekend, the Portuguese press was quick to hype him up and talk about his future.

Newspaper Record has a story today saying his valuation has gone up, finally matching the €17m the Eagles paid to sign him in the summer.

Record recalls that Vinícius could be somewhere else, since he was very close to joining Wolverhampton Wanderers in the last transfer window.

The Premier League side had a deal to sign the player from Napoli, but the transfer couldn’t be concluded due to the lack of work permit.

We covered reports about this at the time. 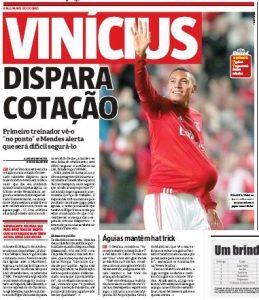 Now it’s reported that Jorge Mendes has warned Benfica that it will be hard to hold the Brazilian, who has 11 goals and three assists this season already. Meanwhile, Eagles president Luís Felipe Vieira now believes they could have a ‘financial return’ with his sale, making a transfer more likely.

Now could Wolves still be interested in him? Well, they had an official at his hat-trick match at the weekend.

Perhaps they could get some help from the super agent to have a second chance to land the striker.