Lionel Messi won the Ballon d’Or for the sixth time on Monday.

The Argentine won the award for the first time in 2009, after playing an integral role in Barcelona’s treble winning campaign under Pep Guardiola’s guidance.

The Italian newspaper states Arnault is interested in taking over the Serie A side who are currently owned by American investment firm Elliott Management Corporation, and he dreams of having the best player and best coach at the San Siro.

“If I ever had to take a step like that, I would like the best footballer in the world and the best coach,” Arnault was quoted as saying.

Messi and Guardiola’s deals at Barcelona and City will run down in 2021 and if Arnault dreams of signing them, it’s claimed he will have to invest €59m on the duo (€40m for Messi and €19m for Guardiola). These figures are not unreachable.

The alternatives to Messi and Guardiola for Arnault are Paris Saint-Germain’s Kylian Mbappé and Liverpool manager Jürgen Klopp. 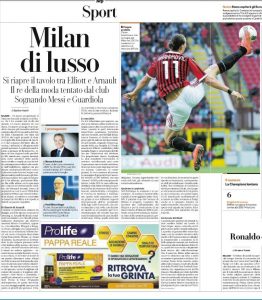 La Repubblica claims if a potential sale were to take place, it would happen by the end of this year and Aranult would push for renovation of the San Siro rather than reconstructing it.

In September, La Repubblica reported about Arnault’s interest in buying Milan, but those claims were denied by his son Antoine Arnault on Instagram.