One of the more drawn out sagas of Arsenal’s transfer window, Lucas Pérez’s exit from the Emirates finally materialised in the shape of a loan to his former club Deportivo La Coruña.

The Spaniard seemed extremely keen on returning there, and after many public outbursts from his agent, the striker got his wish.

So far, the 29-year-old hasn’t exactly performed to the best of his abilities, scoring just one goal in five appearances, but having only played a bit part throughout the last campaign, that was to be expected.

One club who were also keen on the Spaniard were Marseille in LIgue 1, and that interest hasn’t died down, with Le10 Sport claiming Rudi Garcia’s side could come back for him next summer. 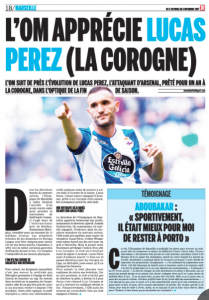 A lot will depend on how he does throughout the season, and the French side will be keeping an eye on his performances for the La Liga club during the 2017-18 campaign.

Furthermore, their director of football, Andoni Zubizarretta, is said to be a big fan of what Lucas Perez has to offer.

If it came to a bidding war, Marseille certainly have more financial pull than Deportivo, giving them an advantage there, but will the Arsenal owned player want to leave his beloved club if a chance to return there permanently presents itself?