Linking Harry Kane and Dele Alli to Real Madrid has been a hobby of sections of the English media for some time.

Not a great deal of interest has been given to the possibilities by the more serious Spanish sport media, largely leaving it to outlets such as Don Balon and El Chiringuito, but the continual insistence of interest has had some impact.

Marca’s chief editor, Jose Felix Diaz, has on Saturday dedicated part of his column to rumours about the pair. There’s a growing feeling in Spain that Madrid need to sign a Galactico next summer, partly because they haven’t for a while, and the two Tottenham players are as good candidates as any.

The Spanish newspaper make sure to send some praise to Mauricio Pochettino for hitting above his weight at Tottenham, and then get on to the serious business of transfers. 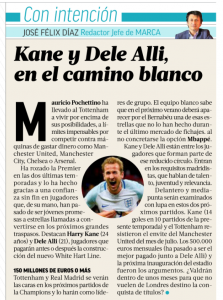 Real Madrid know they need to make a big signing next summer, as per the claims, with Kane and Alli said to fall into a small circle of players who would fit into that category.

Potential transfer fees for each are put at ‘€150m or more’.

Both will be watched with a ‘magnifying glass’ during Tottenham’s Champions League matches against Real Madrid, which is probably part of the reason Jose Felix Diaz is mentioning the rumours.

Marca don’t add anything, there’s no claims of contact, or even that Real Madrid have decided they want either Tottenham player. But, there’s at least a little groundwork being prepared for Marca to then push the rumours should either player impress against Real Madrid.