If the manager gets the club back to the Premier League, and he’s looking on track to do so, then he’ll be something of a football god in the Yorkshire city and be encouraged to sign a new contract.

However, there’s a claim from South America that when Bielsa does go, he’s already recommended a man who could take over from him.

Juan Carlos Osorio, who has become a friend of Bielsa’s after visiting him in Argentina, backed the manager for the Leeds job and predicted his success.

At the time, Osorio was manager of the Mexico national team but rejected the chance to continue in the role, after three years, and rejected a new contract.

He’s since been manager of Paraguay, for all of one match, before leaving that role too. 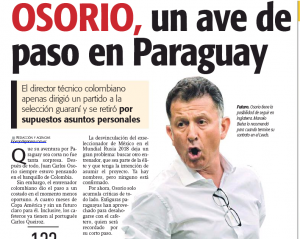 Diario Expreso make the Leeds claim and state: ‘Osorio has the possibility to continue in England. Marcelo Bielsa recommends him for when he finishes his contract at Leeds.’

One to keep an eye on for the long term.