Home Premier League Chelsea “There are many things in this” – Chelsea and Man United target...
SHARE

Now that Atletico Madrid managed to win another La Liga title, it’s time for the Colchoneros to work on keeping their stars and continuing to fight for big things next season.

When speaking of important players they must work to hold in their squad, that starts with their goalkeeper, Jan Oblak, who’s been at the club for seven years now.

Marca today features a story saying the player has been wanted by the likes of Chelsea, Manchester United and Paris Saint Germain, and these clubs never lost track of his potential.

The newspaper refers to these clubs as the ‘big from Europe’, and highlights Oblak’s quotes which show he’s not concerned about what’s happening to him this summer.

“Future? I do not say anything. I’m at Atletico, I’ve been for seven years now and have two years left on my contract,” said Oblak. 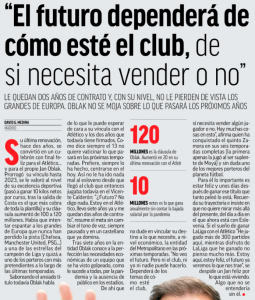 “I do not see the future. But neither the club, nor me, nor anyone else can do it. It’ll depend on the issues of how the club are, if they need to sell a player or not. There are many things in this.”

Jan Oblak is now protected by a release clause of €120m, which is certainly the price Atletico Madrid would demand in case Chelsea or Manchester United go for his signing in the summer.

The Blues seem happy with Edouard Mendy, who’s been doing a great job since arriving at Stamford Bridge, while they keep Kepa Arrizabalaga as an alternative on the bench. Meanwhile, Manchester United watch Dean Henderson’s development as they keep David De Gea as a safe option.

Now would either of those clubs spend that much on Oblak this summer? It seems unlikely.