Manchester United have enjoyed a good run of form in 2020, after struggling in the first half of the season.

Bruno Fernandes’ arrival from Sporting in January has been one of the major reasons for the upturn in their performances.

Since the Premier League resumed last month, the Portugal international has formed a good partnership with Paul Pogba.

Nemanja Matić has provided cover for the duo while operating as a holding midfielder.

This has seen the likes of Scott McTominay, Fred and Andreas Pereira settle for places on the bench.

The latter has made two substitute appearances since the restart and his chances of featuring regularly for United look slim. A loan switch or move to another club could quickly become an option for Pereira this summer.

According to Het Belang van Limburg, the English club have informed the 24-year-old’s camp that a summer exit from the club is ‘absolutely not an option’, as Ole Gunnar Solskjaer still counts on the player. 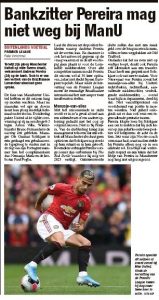 His contract lasts until 2023 and if any club wants to take the former Valencia man away from the Red Devils, they will have to pay a ‘lot of money’.

The report further adds Pereira is not looking to leave his employer, even though he hasn’t started regularly in this calendar year.