Over the past few days, we’ve seen a number of rumours sending Manchester United’s David De Gea to AS Roma, where he would be reunited with José Mourinho next summer.

Corriere della Sera started it on Wednesday, which was then backed up by Corriere dello Sport on Thursday, and the latter of the two has it again on Friday, this time with a bit more information.

The previous two reports suggested it was José Mourinho who could be pushing to have the Spaniards between the sticks in Rome for the 2021-22 campaign, but it appears to be the other way around.

According to Corriere dello Sport, De Gea, who ensured Manchester United beat AS Roma to set up a Europa League final against Villarreal, ‘has been offered by Jorge Mendes’ agency and is appreciated by the manager’. 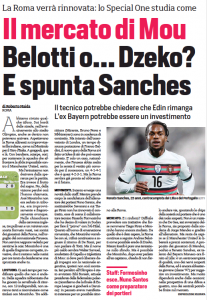 Of course, as we explained on Thursday, it will also vastly depend on what the Red Devils’ plans are for the Spain international going forward and if Dean Henderson’s run as the number one goalkeeper continues into the next season.

That’s why Corriere write ‘it needs to be understood if Manchester United will let [De Gea] go at a low price’.

Considering he has two years (plus the option for another) left on his contract and a high wage packet, that seems unlikely.