The Catalan media will not let go of the idea Manchester United are keen on Ansu Fati. Dragging on for a few months, the claims are often insistent and yet still unconvincing.

Monday’s edition of Mundo Deportivo states the Premier League club are ‘stalking’ Fati ‘more than anyone’.

Barcelona aren’t bothered by talk of ‘mega offers’ from Manchester United, or anyone else for that matter, because they believe they have the desire of the player on their side, and that he’ll soon switch to a new contract with a €400m buyout clause.

Mundo Deportivo state Manchester United want a winger with ‘projection’ and are looking at 17 year old Fati given their problems with signing Jadon Sancho from Borussia Dortmund.

However, the area of most need in attack for United is right wing, where Sancho plays. Fati can operate there but he mainly plays on the left. 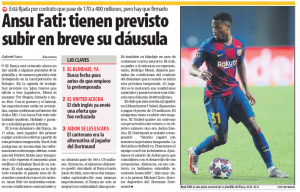 Therefore, Mundo’s claim Manchester United are ‘willing to pay’ Fati’s current €170m clause is hard to believe. If they were, then surely they’d just have paid what Dortmund want for Sancho.

Paying more for a second choice doesn’t make any sense.