The 23-year-old goalkeeper is earning rave reviews in the Bundesliga after breaking through into Schalke’s first-team last season.

He’s now the first-choice goalkeeper at the club and has started all of their seven games this season, with David Wagner’s side currently sixth in the table and level on points with Bayern Munich.

His form rise has earned attention both at home and abroad, and SportBild say that Manchester United, as well as Paris Saint-Germain and Atlético Madrid, have all shown interest in signing the player.

Unfortunately for them, Nübel is planning a future in Germany. Reports have suggested he would be signing for champions Bayern Munich next year, but that’s not yet been determined.

Schalke are petitioning hard for Nübel to stay with them as they can guarantee him game time, while he’s also captain and has a good relationship with the fans. 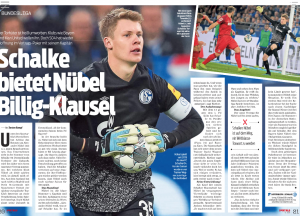 They have offered their young starlet a new contract that will run to 2024 and see his wages rise from €600,000 per year to over five million.

That new deal will include an ‘opt-out’ clause, for between €10m and €20m, which would activate in 2021. Schalke consider that better than losing him on a free when his contract expires next summer.

That potential new deal, plus Nübel’s apparent desire to stay in Germany and the interest from Bayern, would seemingly rule out Manchester United at this stage.

They are no longer in need of a replacement for David de Gea after his decision to sign a new contract at Old Trafford, but there’s every chance Nübel is a player they are keeping close tabs on for when they eventually do have to replace the Spaniard.