Leroy Sané may be out injured until sometime next year, but that doesn’t stop the rumours about a move to Bayern Munich.

The German was heavily linked with a big-money transfer to the Bundesliga giants throughout the summer before a knee ligament injury picked up in Manchester City’s Community Shield win over Liverpool.

Since then there have been various reports that Bayern would look to revive the deal and it appears that is something they are working on behind the scenes.

It’s not the first time the pair have met, having done so in the summer when Bayern were negotiating with Manchester City over a move for the German forward. 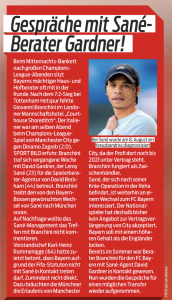 He remains keen on the move despite his injury, with Bayern offering a higher salary than what is on offer at the Etihad, and ‘hasn’t accepted’ an offer from Manchester City to extend his contract.

SportBild reached out for comment from Sané’s management, who refused to say anything, and Bayern CEO Karl-Heinz Rummenigge did the same, stressing they cannot contact Sané directly as that would break FIFA statutes.

Instead, Branchini is acting as a ‘middleman’ to get the deal sorted, although it’s not explained when Bayern want the transfer to happen.

This meeting, though, coupled with the fact Branchini recently missed Bayern’s team banquet after the win over Tottenham Hotspur to watch Manchester City beat Dinamo Zagreb, suggests the Germans might be pushing for a deal in January.

That would corroborate earlier reports from Christian Falk that the Bundesliga champions would go back for Sané in January.