Manchester United had an official watch Benfica once again on Saturday evening, which carries on the constant scouting of the Lisbon club. For at least a couple of years Manchester United have regularly watched Benfica matches, but recently it’s been every single game attended.

That’s led to links with Victor Lindelof and Nelson Semedo, and there’s a Spanish angle building on the second player. Catalan newspaper Sport report on Sunday that Barcelona’s absolute priority for the summer transfer window is a right back, a position they haven’t sorted out since, perhaps unwisely, letting Dani Alves leave for Juventus.

Manchester United are held aloft as the club’s competition for Semedo, and it’s pointed out that the Premier League club would be prepared to pay €40m, which is what Sport believe is Benfica’s asking price. 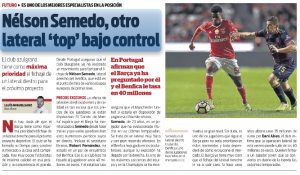 This all sounds quite similar to claims from Portugal last month that Manchester United have reached an ‘agreement in principle’ to buy Semedo from Benfica. The fee was put at £35m, which converts roughly into the €40m figure used by Sport.

These claims aren’t going anywhere and if Jose Mourinho wants a top right back, despite Antonio Valencia doing well in the position, then Semedo is one of only a few on the market.