It’s no big surprise to see Manchester United flop Alexis Sanchez being linked to a couple of Italian clubs these days, but it’s still shocking to see how devalued the player is in the transfer market.

As newspaper Tuttosport brings a story about the battles Inter Milan and Juventus are set to have in the summer, they make it pretty clear that the main target is Fiorentina winger Federico Chiesa.

Regarding Sanchez, it’s claimed the player has been offered to both clubs, with his agent Fernando Felicevich meeting them last week.

Manchester United are said to be making his departure easy, and would accept to continue paying half of his wages in case of a loan deal. 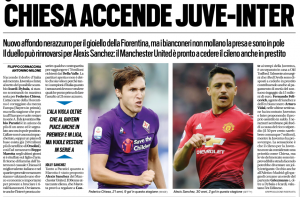 Unfortunately, neither of the Italian clubs are overly interested right now.

Tuttosport says Inter Milan are acting ‘cold’, because half of his wages would still be over €7m a season, and that’s a lot of money for them. Meanwhile, Juventus are still to give a response, since they have other priorities in the market and aren’t ruling out anything for now.

Atletico Madrid are named as another possibility, especially after the departure of Antoine Griezmann. Along with Sanchez, Paulo Dybala and Mauro Icardi are possible replacements for the Frenchman.