Home Europe Manchester United player has ‘confided in teammates’ his uneasiness about future at...
SHARE

L’Equipe have a big Paul Pogba article today, getting a brief mention on their front page.

It’s much of the same. The French newspaper says a departure ‘seems’ on the cards and is ‘seriously considered’.

Absolutely nothing new and something which an onlooker of the situation could very easily write without having any additional information.

And then, towards the end, L’Equipe add something which may be a step forward, as long as it’s not also from assumption and reading of the room.

They say Pogba has ‘confided in teammates’ over his uncertainty and uneasiness about Manchester United going forward.

Then L’Equipe remind everyone that Pogba has two years left on his contract, and they add Manchester United haven’t yet taken the first step over a renewal. 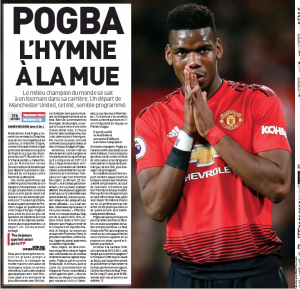 That could be the crux of the issue here.

Despite claims from elsewhere that Real Madrid are willing to spend £150m to sign Pogba, the club’s local media has been talking that prospect down.

L’Equipe believe only Madrid and PSG are reasonable destinations.