On Wednesday morning, Gazzetta dello Sport sent their Napoli supporting readers on a bit of an emotional rollercoaster.

The story involved Lorenzo Insigne and a possible exit, with Manchester United and Paris Saint-Germain named as potential landing spots for the winger.

At first glance, it looks like quite a serious story, with the little summary boxes next to the main text revealing that Aurelio de Laurentiis had asked Mino Raiola to try and sort out a sale, starting at €100m for his star, knowing he’d only get around €70m at most.

They even go as far as saying that Insigne is of interest to Manchester United and the Ligue 1 champions, sounding like actual facts. 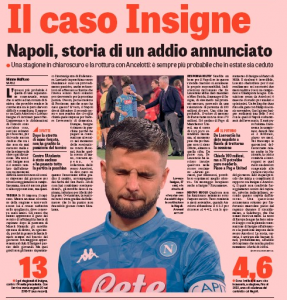 However, delving into the article itself, it all sounds very flimsy.

When it comes to mentioning the Red Devils and PSG, Gazzetta point out this information comes from ‘far from reliable sources’, despite them running with it about a month ago, which we also covered.

It’s the same journalist, writing about the same stuff he did a month ago, and he sounds as unconvinced about it all as he did back then.

All in all, you have to ask, why bother writing it in the first place?

All that happens is these stories get badly translated and twisted by the foreign press, therefore creating excitement when there isn’t any, all the while getting Gazzetta dello Sport’s name out th… oh, wait, yeah, now we see it.