It looks like Manchester United are being left behind in the race for the Benfica defender Ruben Dias.

Despite being named as the main competitors for the player for months, the Red Devils are now seen as just another club who are willing to sign him in the summer.

Newspaper Record brings a story today saying Juventus are in ‘pole position’ to sign Dias, as they develop talks with Benfica for the transfer.

The Old Lady have been told that the player is only leaving Lisbon for the amount of his €60m release clause, but still, they are confident they can send some players to the Eagles and get a discount. 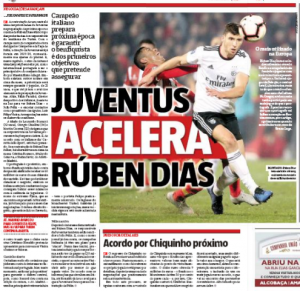 Atletico Madrid were said to be competitors as well, but have now turned their attention towards Porto defender Felipe, who’s close to making the move to the Spanish capital.

Regarding Manchester United, Record writes that the Red Devils have also opened negotiations, but the Old Lady are ‘more advanced’ at this stage.

With the story’s headline saying Juventus now ‘accelerate’ for Ruben Dias, maybe it’s time for United to do the same, or this race will be lost to the Italian side by the time summer comes.